By Charles Marsh – Head of Community @ TopTal. You can view the original work here.

I had a programming interview recently, a phone-screen in which we used a collaborative text editor. I was asked to implement a certain API, and chose to do so in Python. Abstracting away the problem statement, let’s say I needed a class whose instances stored some data and some other_data.

I took a deep breath and started typing. After a few lines, I had something like this:

My interviewer stopped me:

For reference, and to give you an idea of what I was going for, here’s how I amended the code:

As it turns out, we were both wrong. The real answer lay in understanding the distinction between Python class attributes and Python instance attributes. 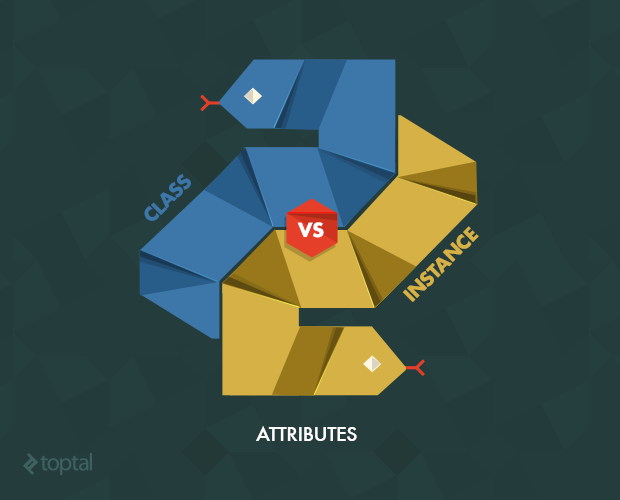 Note: if you have an expert handle on class attributes, you can skip ahead to use cases.

My interviewer was wrong in that the above code is syntactically valid.

I too was wrong in that it isn’t setting a “default value” for the instance attribute. Instead, it’s defining data as a class attribute with value [].

In my experience, Python class attributes are a topic that many people know something about, but few understand completely.

Let’s use a Python class example to illustrate the difference. Here, class_var is a class attribute, and i_var is an instance attribute:

Note that all instances of the class have access to class_var, and that it can also be accessed as a property of the class itself:

For Java or C++ programmers, the class attribute is similar—but not identical—to the static member. We’ll see how they differ later.

A namespace is a mapping from names to objects, with the property that there is zero relation between names in different namespaces. They’re usually implemented as Python dictionaries, although this is abstracted away.

Depending on the context, you may need to access a namespace using dot syntax (e.g., object.name_from_objects_namespace) or as a local variable (e.g., object_from_namespace). As a concrete example:

And, in visual form: 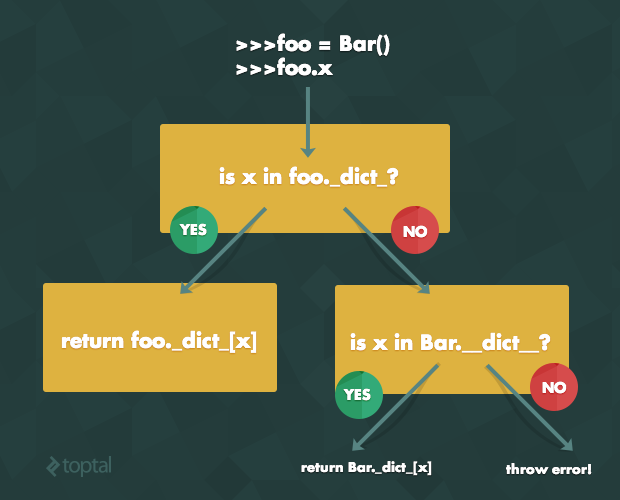 With this in mind, we can make sense of how Python class attributes handle assignment:

Quiz question: What if your class attribute has a mutable type? You can manipulate (mutilate?) the class attribute by accessing it through a particular instance and, in turn, end up manipulating the referenced object that all instances are accessing (as pointed out by Timothy Wiseman).

This is best demonstrated by example. Let’s go back to the Service I defined earlier and see how my use of a class variable could have led to problems down the road.

My goal was to have the empty list ([]) as the default value for data, and for each instance of Service to have its own data that would be altered over time on an instance-by-instance basis. But in this case, we get the following behavior (recall that Service takes some argument other_data, which is arbitrary in this example):

This is no good—altering the class variable via one instance alters it for all the others!

At the namespace level… all instances of Service are accessing and modifying the same list in Service.__dict__ without making their own data attributes in their instance namespaces.

We could get around this using assignment; that is, instead of exploiting the list’s mutability, we could assign our Service objects to have their own lists, as follows:

Unfortunately, this requires that Service users have intimate knowledge of its variables, and is certainly prone to mistakes. In a sense, we’d be addressing the symptoms rather than the cause. We’d prefer something that was correct by construction.

My personal solution: if you’re just using a class variable to assign a default value to a would-be Python instance variable, don’t use mutable values. In this case, every instance of Service was going to override Service.data with its own instance attribute eventually, so using an empty list as the default led to a tiny bug that was easily overlooked. Instead of the above, we could’ve either:

So When Should you Use Python Class Attributes?

Class attributes are tricky, but let’s look at a few cases when they would come in handy:

Note: If you’re worrying about performance at this level, you might not want to be use Python in the first place, as the differences will be on the order of tenths of a millisecond—but it’s still fun to poke around a bit, and helps for illustration’s sake.

Recall that a class’s namespace is created and filled in at the time of the class’s definition. That means that we do just one assignment—ever—for a given class variable, while instance variables must be assigned every time a new instance is created. Let’s take an example.

We assign to Bar.y just once, but instance_of_Foo.y on every call to __init__.

As further evidence, let’s use the Python disassembler:

When we look at the byte code, it’s again obvious that Foo.__init__ has to do two assignments, while Bar.__init__ does just one.

In practice, what does this gain really look like? I’ll be the first to admit that timing tests are highly dependent on often uncontrollable factors and the differences between them are often hard to explain accurately.

However, I think these small snippets (run with the Python timeit module) help to illustrate the differences between class and instance variables, so I’ve included them anyway.

The initializations of Bar are faster by over a second, so the difference here does appear to be statistically significant.

So why is this the case? One speculative explanation: we do two assignments in Foo.__init__, but just one in Bar.__init__.

Note: There’s no way to re-run your setup code on each trial with timeit, so we have to reinitialize our variable on our trial. The second line of times represents the above times with the previously calculated initialization times deducted.

From the above, it looks like Foo only takes about 60% as long as Bar to handle assignments.

In summary, though these performance gains won’t matter in reality, these tests are interesting at the conceptual level. If anything, I hope these differences help illustrate the mechanical distinctions between class and instance variables.

Class attributes seem to be underused in Python; a lot of programmers have different impressions of how they work and why they might be helpful.

My take: Python class variables have their place within the school of good code. When used with care, they can simplify things and improve readability. But when carelessly thrown into a given class, they’re sure to trip you up.

Python doesn’t have private variables so-to-speak, but another interesting relationship between class and instance naming comes with name mangling.

In the Python style guide, it’s said that pseudo-private variables should be prefixed with a double underscore: ‘__’. This is not only a sign to others that your variable is meant to be treated privately, but also a way to prevent access to it, of sorts. Here’s what I mean:

Look at that: the instance attribute __zap is automatically prefixed with the class name to yield _Bar__zap.

While still settable and gettable using a._Bar__zap, this name mangling is a means of creating a ‘private’ variable as it prevents you and others from accessing it by accident or through ignorance.

Edit: as Pedro Werneck kindly pointed out, this behavior is largely intended to help out with subclassing. In the PEP 8 style guide, they see it as serving two purposes: (1) preventing subclasses from accessing certain attributes, and (2) preventing namespace clashes in these subclasses. While useful, variable mangling shouldn’t be seen as an invitation to write code with an assumed public-private distinction, such as is present in Java.